Presentation of the EAN

Since 1980 the ALARA principle has been part of the European Basic Safety Standards and has been progressively introduced into national regulations. In the Euratom Directive 96-29 ALARA was re-emphasised as the cornerstone of the radiological protection system. Throughout the 1980s and early 1990s ALARA was integrated into many organisations radiation protection programmes, particularly in the nuclear industry. However there was still much to be done espacially in the non-nuclear industry as well as for the management of internal exposure.

Therefore in 1996 the European Commission created a European ALARA Network (EAN), to further specific European research on topics dealing with optimization of radiation protection, as well as to facilitate the dissemination of good ALARA practices within the European industry, research and medical sectors. After the end of the financial support of the European Commission, in 2005, EAN became self sustainable as a not-for-profit association under the French law. 20 countries are participating to the network, which is coordinate by CEPN and PHE.

EAN from the beginning

Since 1980 the ALARA principle has been part of the European Basic Safety Standards and has been progressively introduced into national regulations. In the Euratom Directive 96-29 ALARA was re-emphasised as the cornerstone of the radiological protection system. Throughout the 1980s and early 1990s ALARA was integrated into many organisations radiation protection programmes, particularly in the nuclear industry. However there was still much to be done especially in the non-nuclear industry as well as for the management of internal exposure.

Therefore in 1996 the European Commission created a European ALARA Network (EAN), to further specific European research on topics dealing with optimization of all types of occupational exposure, as well as to facilitate the dissemination of good ALARA practices within all sectors of the European industry and research. CEPN (Centre d'étude sur l'Evaluation de la Protection dans le domaine Nucléaire, France) took on the role of the Network Coordinator with NRPB (National Radiological Protection Board, UK) providing support. The key outputs were to be twice yearly Newsletters and an annual themed Workshop that was to provide recommendations to the EC and other stakeholders involved in radiation protection.

During 9 years, the EC provided various tranches of funding to enable the Network to establish itself:

In June 2005, after these 9 years spent within the scope of the research programs from the European Commission, the EAN Steering Group unanimously adopted a Cooperation Charter, the Terms and Conditions of the EAN, for defining the new goals and means for the next decade. The Steering Group also decided to set up a legal entity for managing the network coordination and financing in a self sustainable way. This legal entity was set up for an initial period of 5 years in July 2005 as a not for profit association called “Réseau ALARA Européen – European ALARA Network, EAN” registered under the French law.

In 2010, the EAN Steering Group decided to extend the duration of the EAN association for another period of 5 years. In parallel, it was also decided to renew the Statutes and the Terms and Conditions of EAN to take into account feedback experiences of the network's operation. Finally, the EAN Steering Group also agreed on a Strategic Plan for 2010-2015, which described the expected work of EAN during this period taking into account the future challenges of the practical implementation of ALARA.

The original objectives of EAN were:

These objectives have been progressively expanded. Similarly the scope of the Network, which was originally limited to improving occupational exposure in industry and research only, was expanded; first to include occupational exposure in medical and Naturally Occurring Radioactive Materials (NORM) areas, and then to other types of exposures. Finally in 2010, the objective has been simplified at the occasion of the renewal of the EAN Terms and Conditions:

The Steering Group members may be any type of stakeholder concerned with radiation protection. The Steering Group decides the work programme and planning of the network activities; in particular it takes decisions on:

Several countries have decided to financially support EAN coordination, while others will support specific EAN actions such as Workshops. Those institutes financially supporting the coordination of EAN are members of the EAN association Administrative Board as well as the Coordination Team. A close link with the European Commission is pursued through the support of sub-networks in several domains of concern (Non Destructive Testing, NORM, medical). In addition, the International Atomic Energy Agency  (IAEA) supports the participation of representatives from non-EAN countries to EAN workshops and agreements are set up with IAEA to co-operate, and ultimately merge with another network of Eurasian countries.

The cooperation with other networks with interests in the practical implementation of ALARA is encouraged. Thus EAN has established formal cooperation agreements with the following organisations :

From the beginning, EANs most important events have been the annual Workshops devoted to specific topics where it is thought that significant improvements are still possible and may be expected. with the aim of sharing experiences, promoting debates and drawing conclusions and recommendations to be widely diffused and disseminated towar relevant stakeholders. Each Workshop gives rise to a set of recommendations to the European Commission, to the national regulatory bodies and to other stakeholders in order to facilitate the practical implementation of ALARA.The first twelve Workshops were devoted to:

From the beginning, EAN has also published the ALARA Newsletter twice a year to disseminate practical. cases of ALARA implementation, examples of good practices, lessons learned, workshop conclusions, ALARA information, etc. Feedback from different sources indicates that the Newsletters reach several thousand individuals or institutions, mainly in Europe, and that the lessons learned from incidents are among the most interesting information.

By 2000, it was decided to make use of EAN as a vehicle to support European surveys on topics of interest to radiological protection. The first survey dealt with the actual implementation of the European BSS (2000). Its results were presented in the Newsletter 9 in 2001. An update was presented during the 10th Workshop in 2006. Other surveys dealt with the incidents data exchange (2000 - 2002) and the implementation of the EC Directive on outside workers (2004 - 2005). Many other surveys have also been performed.

Finally, working groups and sub-networks are established on topics of particular interest. Sub-networks are meant to be sustainable, whereas working groups are created for a limited period of time. In 2005 the European Radioprotection Authorities Network (ERPAN) was set up to deal with operational exchanges on regulation and control activities such as specific inspections and transcription of EC Directives into national regulations. In 2009, a working group on ALARA culture has been set up.

In 2019 and 2020, the EAN Bureau Members have worked to develop a Strategic Agenda that contains the vision, objectives and proposed activities of the EAN from the period of 2021 - 2026. This documents succeeds and replaces the former EAN Strategic Agenda 2015 - 2020. 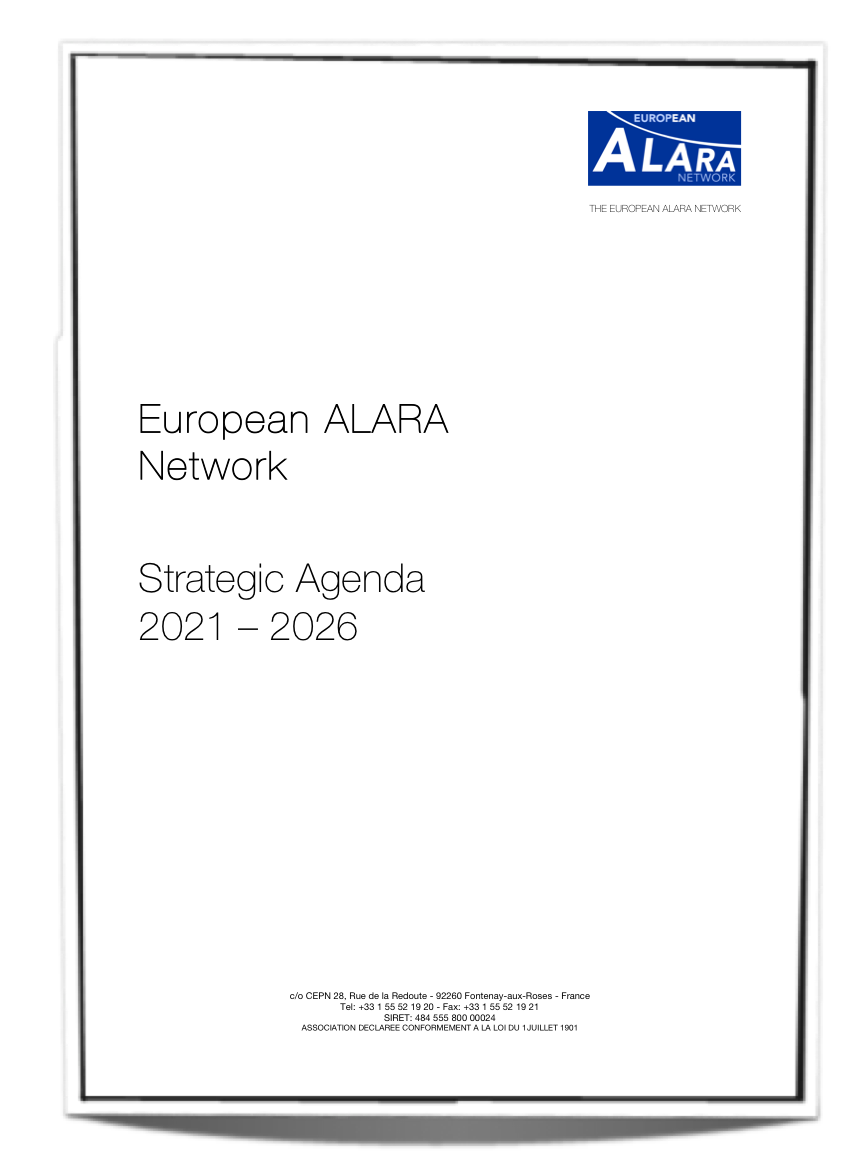 The Strategic Agenda 2021-2026 first reemphasizes the shared interest of the Members in the promotion of the practical implementation of ALARA and the exchange and dissemination of ALARA Culture and develop on the topics the EAN would like to address.

The Strategic Agenda develops on 4 chapters:

In each chapter, the strategic objectives are given and combined with proposed activities, to be completed in the calendar years 2021-2026.